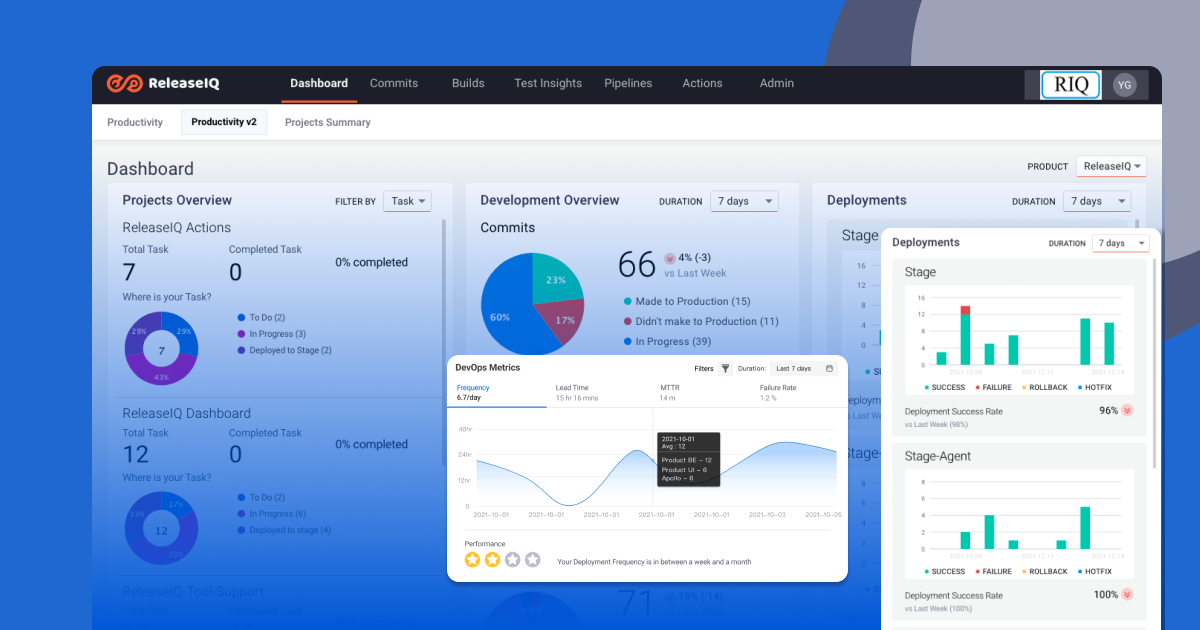 ReleaseIQ’s end-of-year update includes valuable capabilities for DevOps and engineering teams that are looking to have even more impact on their software delivery.

Our new capabilities address many of product leadership’s top of mind issues such as:

JIRA Integration (Track and Update Projects from Commit to Deployment)

ReleaseIQ now provides integration with JIRA to track individual tasks/stories/Epics to see what environments they are in.  Using the integration, the development teams using JIRA can gain visibility into managing feature development & issue tracking. This feature provides a near real-time trend of estimates with deployments across environments.  It is usually extremely hard to track JIRA issues from CI to CD, especially across different tools.  With ReleaseIQ’s new capability this is very straightforward.

Finally, we have our next-generation productivity and project dashboards which give you the data and insights to keep your team, including the leadership, happy.  Working across all the tools that ReleaseIQ integrates with, some samples are below:

One of the core values of ReleaseIQ is the no-code drag and drop pipeline composer.  While this is extremely valuable to teams building pipelines from scratch or importing pipelines from other tools, there are often times where the number of pipelines makes this method of pipeline creating tedious. In those cases, import/export pipelines as code are more desirable.  Pipeline as code is part of a larger “as code” paradigm, wherein the pipeline definitions are represented as code that can be versioned in a source repository and tracked.  The ReleaseIQ Pipeline Composer now supports both visual and code representation of a pipeline.  With this method, the pipeline representation as code is simple & easy to understand declarative syntax.  We use YAML as it is a common language for configuration.

Implementing automatic deployment verification is an important principle of continuous DevOps pipelines.  Deployment verification where an observability tool is used to track the health of the new application or service and changes are made allowing for rollback if an issue arises in the production environment. ReleaseIQ has implemented the capability to integrate with New Relic and App Dynamics to provide performance events to any step in the pipeline to be used for deployment logic.  Additionally, ReleaseIQ can now send notifications to the observability tool to ensure that teams that use those tools are aware if a deployment occurred.

Putting all of this together, ReleaseIQ aids developers, test, DevOps, management, and leadership with unprecedented pipeline orchestration, automation, and insights to increase productivity and drive faster deployment.

Sign up for a briefing and demo for your team here.